Dump the Powerpoint—Why I Use Non-Linear Presentations 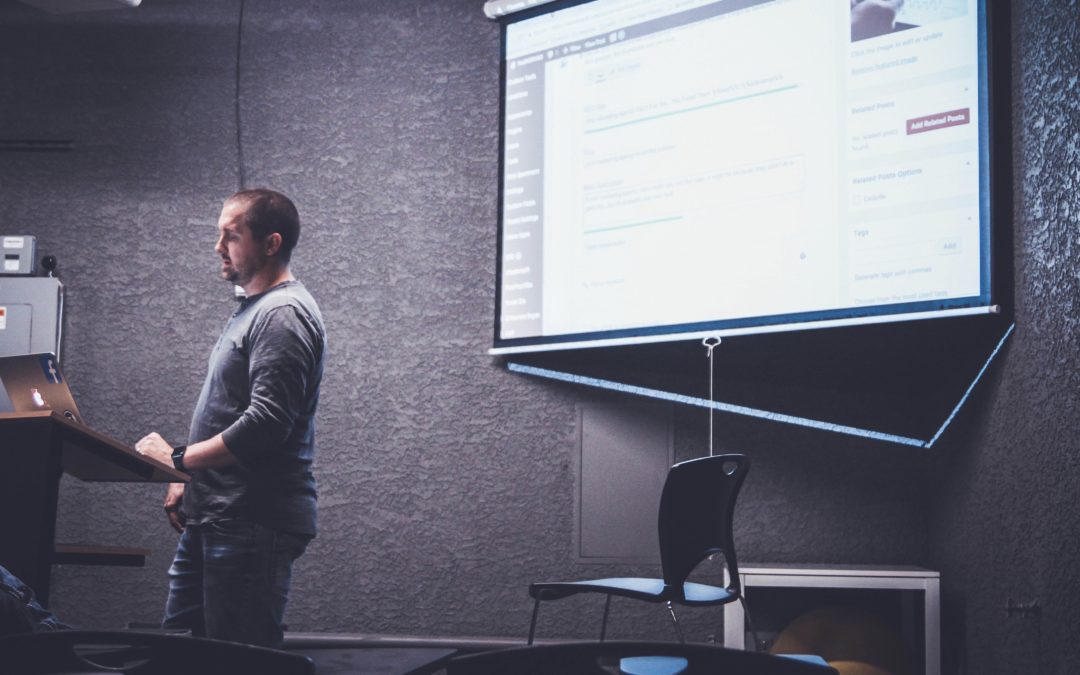 While I was teaching a decade ago at a large university, one year’s annual faculty in-service focused on using technology in the classroom. This essentially boiled down to getting all the teachers to use Powerpoint. “Students these days are visual,” the argument went, “and they struggle to learn unless you also have a presentation.” Predictably, the following semester saw a burgeoning of painfully formatted Powerpoints and no particular increase in educational success.
Teaching, preaching and presenting are now the main thing I do with my life. And I’ve developed a minor allergy towards Powerpoint—particularly the stereotypical “toss your outline up on slides” kind of Powerpoint. For the sake of brevity, I’ll summarize my reasons with a set of guiding principles I rely on:

If our ideas are dead, slick graphics and fancy transitions can’t save us.

There’s a reason that Jeff Bezos of Amazon banned Powerpoint from the boardroom. Bullet points, pie charts and screens packed with text are too often an excuse for sloppy thinking. Too often people simply take their outlines or excerpts from their speaking notes and drop them into slides.
Contrast this with professional speakers in high-stakes presentations—Apple or Google product releases, TED talks and others. Slides contain shockingly few words—maybe a phrase, a single number, or 2-3 words. That’s because they exist as visual aids, supporting the speaker, not competing with him.$ [transition]

Visual aids exist to help you communicate more clearly; not to entertain.

I’m a father of four humans under 8 years old. Getting littles to eat is a major issue of my life. And I confess that at times I have motivated them by alternating foods they like. Two bites of vegetables get you a chocolate chip! And soon the plate is empty.
That works for kids but it’s a terrible strategy for communication. Don’t think of Powerpoint as the way you spice up an otherwise loathsome speech. If your ideas are that boring, fix the ideas—don’t try to bury them under whipped cream.
But when you do choose to put something on the screen (and I usually do!) you should always have a specific purpose for that diagram. Said differently, use exactly zero filler slides. You should never find yourself asking, “so what can I put on the screen during this point?” Visuals exist to support and illustrate great ideas by saying them a bit more clearly; not to make otherwise boring fare somewhat palatable.

The projector is a competitor and it will win. Turn it off.

The standard communication diagram has three core components—the speaker, his message, and the audience that is hopefully listening.* By using a screen, you have effectively injected a second speaker into the equation. Essentially two speakers are now competing for people’s attention.
– ? picture of the diagram with a third speaker in the background.
But visual media is more seductive and distracting than the spoken word. This means that if the screen is the second speaker, he will generally hold people’s attention better than you do. Day-dreamers will be checking out your fonts (I confess guilt!). Note-takers will feel a compulsion to copy down anything you put on the screen, confusing that with learning instead of following the flow of your argument.
The solution? Unless something on the screen is supporting what you’re saying at that time, turn it off. Your powerpoint should have plentiful all-black slides. Help people refocus their attention on your words by using visuals only when you actually need them.

Technology is the servant of the content, not the master.

All of this has sounded quite negative towards visual media. Actually, I am anything but averse to technology in the classroom—just ask my students. I use diagrams and visuals constantly—certainly more than half of the times I preach or teach.
The distinction is that I’m utterly allergic to visuals for their own sake. For all of the reasons above, I’m quite picky about what I’ll project. My guideline is that I only choose to project something when a diagram can communicate more quickly or clearly than I can explain it with words. Said differently, I believe that every time I project a slide or diagram I pay a price for it—I lose a little bit of audience attention. I’m willing to pay that price… sometimes. But the additional value it brings to my communication better outweigh the cost I just paid.

Putting all of this together, you would be correct in guessing that I long ago renounced the stereotypical PowerPoint made up of outline points dropped into text boxes. In its place, I have had good success using non-linear presentations—a collection of diagrams or visual aids I am ready to flexibly use. But that is the topic of a separate post.

By reading beyond this point you disclaim all rights to expect me to write clearly, simply and accessibly.

So I always speak from my iPad Pro. On one screen I have speaking notes and a Bible in two different languages, all while sending out a single image to the projector. So how to manage all of this? And significantly, how to put a black screen up for the audience while still using your speaking notes or preparing the next visual aid? I have used three different strategies:
– Keynote takes over the entire external monitor—even if I am using split-screen. I often create a Keynote presentation with one blank slide along with whatever other images I plan to show. If I pull Keynote in—even from the side, the audience only sees a black screen. When I want to screen share again, I close Keynote and they are back to seeing my full screen.
– PDF Expert is one of the top 4-5 apps I use every day. It’s available on for Mac OS, iPad and iPhone and a fabulous PDF editor. But it has an interesting side feature called “slide show.” With a button I can black out the screen and this works if it is any one of my three open apps. This means I can black out the screen with a single button.
– Shiftscreen is the most novel option. Designed as a way to use your iPad on 16:9 screens without letterboxing it also lets you choose which of three apps to show your audience and has a great “mute” button that you can use to shut down the entire projected image with a single tap.
– https://youtu.be/rWL66UiTZ0Q